Now return to Pakistan where many have been killed and others still trapped after multiple avalanches in Pakistan-controlled Kashmir. Authorities say the death toll has risen to at least 100 across the country, with 76 deaths reported in pakistan-administered Kashmir. The worst affected area was Kashmir's Neelum Valley. Rescuers raced to reach scores of people believed to still be trapped inside their homes. But many roads still blocked by snow, authorities used helicopters to evacuate the injured. Local residents described the disaster.
There has been landslides in the area from the front and behind which has affected the area. You can see this debris lying in front of you before houses have been completely damaged and there have been three casualties.
In the upper Neelam area where my relatives live they experienced a snowfall of approximately 11 to 12 feet and there is no access to the areas, no ground or air communication is working. And we're not receiving any information about our relatives we don't know what to do now there's also notice that I don't see. 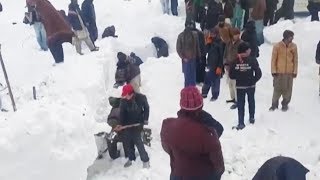